In the aftermath of the terrorist attacks in Paris and San Bernardino, anti-Islamic sentiment is at a fever pitch in America. 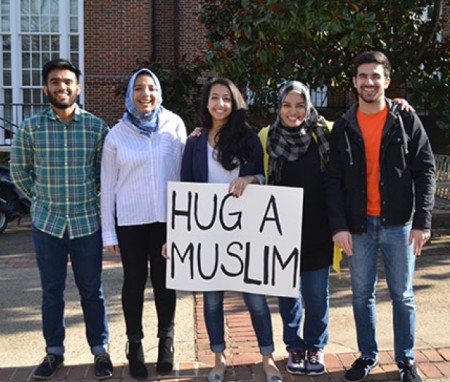 Since the Paris attacks, there have been more than 37 suspected anti-Islamic hate crimes in the US (compared with an average of 12.6 a month over the past five years). Eleven of those hate crimes occurred in the week after the San Bernardino shooting.

According to the New York Times, in the hours after the San Bernardino shootings, the top Google search containing the word “Muslim” was “kill Muslims.” Anti-Islamic hate crimes and sentiment are higher now than they have been at any time since 9/11.

Last week, in Virginia, an entire school district closed after an uproar surrounding a homework assignment on Islam. The school was inundated with violent and hateful emails, social media comments, and complaints from parents after a geography class lesson about world religions included the Islamic statement of faith written in calligraphy. One would think that in order to learn about other cultures, we might learn about what is important to those cultures. Not in America, apparently.

In Minnesota last week, an uproar ensued after students were asked to sing a song about Ramadan in Arabic at a holiday concert. Of course, Christian and Jewish songs were also part of the repertoire, but how dare students have to learn and sing a song about (according to one parent) “the religion of hatred?”

In November alone, there were 17 “mosque incidents” in the US, according to CAIR, the Council on American-Islamic Relations. These incidents include damage, destruction, vandalism, and acts of intimidation. All but two of these occurred in the second half of November, following the Paris attacks. 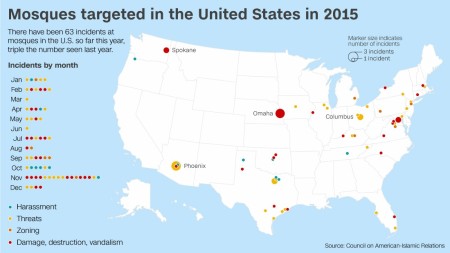 In the wake of the Paris attacks, we have seen 31 states refuse to take in Syrian refugees.

We seem to have a perfect storm occurring in America at the moment. Nearly half of Republicans believe our sitting president is a Muslim. We have a GOP front-runner who wants to ban Muslims entry to the US, and is open to the idea of requiring them to carry special IDs. We have seen high profile attacks on civilians by ISIS operatives and sympathizers. We are being whipped into a frenzy by social media, the 24-hour news cycle, and desperate GOP candidates who know that fear is a powerful drug.

We have lost our minds.

The reality is Americans are more likely to be killed for being Muslim than they are to be killed by a Muslim.

The reality is that many Muslims already carry ID cards: IDs that prove they are members of our armed services, our doctors, our diplomats, ivy league students, our attorneys.

The reality is that America has been strengthened by immigrants from many countries where Islam is the dominant religion. (A certain Apple Computer founder’s father came to America as a Syrian refugee.)

The reality is that by succumbing to Islamophobia, we are doing exactly what ISIS wants us to do.

After the Boston Marathon bombing, security expert Bruce Schneider said, “Terrorism is a crime against the mind. The message of terrorist attacks is you’re not safe and the government can’t protect you — that the existing power structure can’t protect you.” 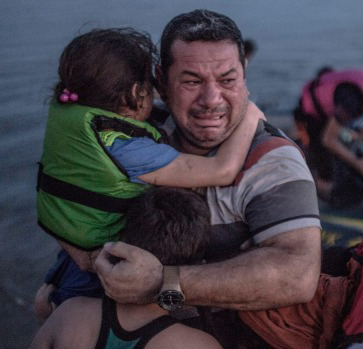 And about those refugees. Says Daveed Gartenstein-Ross, a senior fellow at the Foundation for Defense of Democracies: “If they [ISIS] can spur a backlash against refugees, then they can recruit from that population when the backlash occurs.”

We are a developed nation responding with the collective mindset of Neanderthals. The primitive savages of ISIS have bamboozled us.

Gartenstein-Ross: “The damage from terrorism is primarily emotional. To the extent this terrorist attack succeeds has very little do with the attack itself. It’s all about our reaction. We must refuse to be terrorized. Imagine if the bombs were found and moved at the last second, and no one died, but everyone was just as scared. The terrorists would have succeeded anyway. If you are scared, they win. If you refuse to be scared, they lose, no matter how much carnage they commit.”

For those who aren’t keeping score, we’re losing. And we’re becoming horrible human beings in the process. 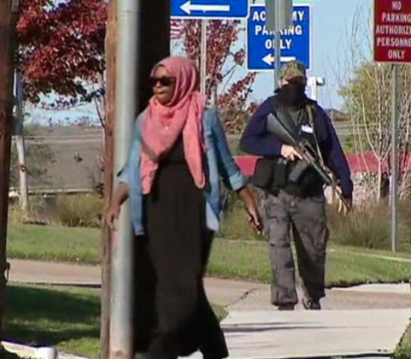 Eric is a marketing professional working and living in Portland, ME. His writing on politics, science, and culture has appeared on NPR.com, Babble.com, and other national and regional outlets. Eric is also a public speaker on topics related to branding, social media, and cause marketing. He spent 10 years as a recording and touring musician. He has lived up and down the East Coast, but loves Portland the very most.